What does libra’s skepticism tell you about bitcoin?
Share 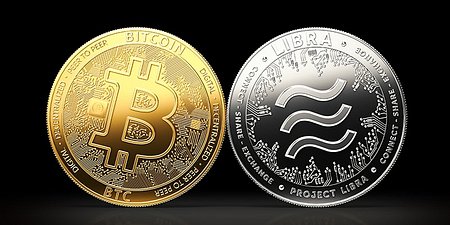 Overview
Facebook’s dream of being a cryptocurrency giant seems becoming more unrealizable by days, as the increasing regulatory uncertainty is seemingly jeopardizing the company’s Libra project. While it seems that Libra has been surrounded by everything but good news even before it’s born, crypto watchers should ask themselves, does bitcoin need Libra to thrive at all? A crypto world without Libra, is that a good thing or not? What will be a no-Libra crypto world would be like and the impact on bitcoin?

Scrutiny
Despite its innovative approach and its ambition as a global currency, Facebook’s Libra seems to remain unwelcome in the world of traditional finance, especially from a regulatory perspective. Just recently, a report from the Group of 7 warned that a global cryptocurrency like Libra could pose a risk to the global financial system. The report highlighted the AML concerns, saying that “Libra could give rise to several serious risks related to public policy priorities including, in particular, anti-money laundering and countering the financing of terrorism, as well as consumer and data protection, cyber resilience, fair competition, and tax compliance.”

US Treasury Secretary Steven Mnuchin said the G7 finance ministers and central bankers all had “very strong concerns about Libra and stable coins in general”, although they believed in financial innovation and the need for cheaper international payment processing.

The US, the UK, and France have also raised similar concerns. Ahead of Facebook’s Mark Zuckerberg testify at the House Financial Services Committee in late October, US Senator Brian Schatz (D-HI) and Sherrod Brown (D-OH) sent three separated letters to the CEOs of Visa, Mastercard and Stripe, which were among key partners of the Libra project, saying Facebook has failed to address regulatory concerns over terrorism, money laundering, monetary policy, and economic destabilization. The Senators also added that “it is chilling to think what could happen if Facebook combines encrypted messaging with embedded anonymous global payments via Libra.”

That fact that Visa, Mastercard, PayPal, eBay, Stripe, and Mercado Pago have already announced their withdrawal from the Libra project in mid-October, however, despite the departure of the big names, the Libra Association finalized its board members after a meeting in Geneva, Switzerland in mid-October.

Reverse Thinking
Creating a simple yet global cryptocurrency that is accessible to millions for everyday use, and run on a secured network backed by blockchain technology, that sounds as perfect as it is, and with the support of a leading social media company and its global partners, Libra seems destined to be a success. However, perhaps it’s all these features Libra born with, these edges could make regulators believe that Libra could pose a tangible threat to the status of the US dollar as a global reserve currency.

If we look at the whole Libra story from a wider perspective, all the skepticism that Libra has been facing is actual proof that the original idea of decentralized finance works and it could change the world of finance forever, especially parties with a vested interest.

According to the original bitcoin white paper, Satoshi Nakamoto envisioned bitcoin as “a purely peer-to-peer version of electronic cash would allow online payments to be sent directly from one party to another without going through a financial institution.” Isn’t that just what Libra is trying to achieve? Although this would eventually fall into the debate of centralized of the decentralized, however, broadly speaking, the original concept of bitcoin, or Libra, in this case, could disrupt the order of the world of conventional finance if it became what it claims to be.

Bitcoin Needs Libra?
Now it’s more than a decade since the debut of the original bitcoin white paper, the cryptocurrency market is still young but relatively stable and mature compared to 10 years ago. If we all believe that bitcoin is at the right market position and act a leading role in the cryptocurrency market, where bitcoin will head to in a market with or without Libra?

Bitcoin has been acting as a “benchmark” of the cryptocurrency markets, and undoubtedly the most widely quoted crypto in the financial world. If Libra is lucky enough to be greenlighted by global regulators and become what it supposes to be, it could cause bitcoin prices to surge drastically as a knee-jerk reaction, however, in a macro and long term perspective, we believe bitcoin doesn’t need libra to thrive at all.

Part of the purpose bitcoin has is as a store of value, and we’ve been seeing bitcoin functioning more in that way, as the digital gold narrative has been heavily discussed in the times of market turbulence. We believe that in a crypto market where bitcoin and libra coexist, they will possibly serve different purposes, where bitcoin is more of a store of value, while libra could be more on the payment side since it was backed by a social network that has 2.7 billion users.

Still, with the substantial regulatory challenges, it’s possible that libra could be dead even before it’s born, or at least Facebook and it’s libra partners will have to go through some serious legal and regulatory challenges in the coming years before letting libra to get into the market. We believe this prolonged process could help lawmakers, regulators and financial markets to have a deeper understanding of bitcoin and cryptocurrency and could push bitcoin closer to the general public. In this case, libra could be “died a hero”, though it’s still too early to make that call.

Conclusion
As a crypto benchmark, bitcoin doesn’t need libra to drive the prices of bitcoin, although it could have some short-term influences on bitcoin prices at its initial stage (assume libra got all the regulatory approvals). From a long-term perspective, bitcoin and libra could serve different purposes and coexist in the crypto markets. Regardless of the outcome of the libra saga, bitcoin could benefit from Facebook’s efforts in clearing legal and regulatory barriers, pushing crypto-asset one step closer to the general markets.