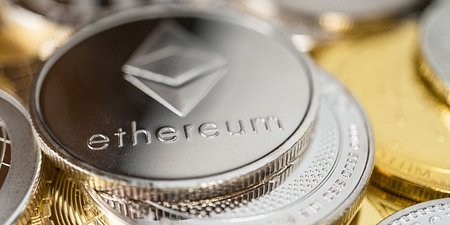 Ethereum: What Could Turn its Underperformance?

Overview
The prices of Ethereum has been underperforming bitcoin this year, as the second-largest cryptocurrency gained less than 5% this year, while BTC has still maintained its staggering 95% YTD gains despite the previous selloffs. In light of the successful implementation of the latest Istanbul network upgrades, and the rising popularity of the DeFi, does playing the catch-up game with ETH means a viable strategy for investors? From a macro perspective, Ethereum’s approval among financial institutions has been rising noticeably, what does that mean for the broader ETH investors?

ETH Underperforms
Bitcoin has always been the most widely quoted cryptocurrency in the world, it often acts as a benchmark of the broader crypto space, and its performance has been a significant market focus since the very first day. Indeed, the cryptocurrency markets look a lot different now than the time bitcoin made its first debut. The rapid development in the crypto space has widened the broader crypto spectrum, resulting in the rising investment and application appetite for altcoin like ETH, XRP, and EOS. Despite the massive ETH rally in late 2017 to early 2018, the prices of ETH have been significantly underperforming BTC this year. 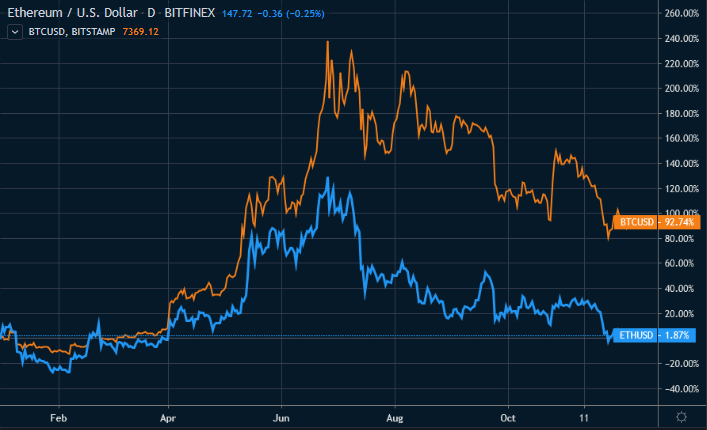 While many factors may have attributed to ETH's underperformance, giving a multi-layer analysis could provide us with a more comprehensive look at the Ethereum, and whether the prices of ETH have the potential room to make a decisive turn in the long run.

Network Valuation
In the age of the internet, investors sometimes could find difficulties to value new economy companies using conventional valuation methods, FAANG stocks are good examples of that. Despite the over-valued criticisms, the group of the most influential tech giants has been one of the critical drivers of the equity markets for quite sometimes.

Similar to the FAANG stocks, many believe that cryptocurrency is also a network value-driven asset, meaning that the more people use it, the higher the value it will be. There were more than 81 million unique addresses in the entire Ethereum network, and the number has been growing solidly since early last year.

However, things would look less robust when considering the usage factor. The number of Ethereum’s active address has stabilized at around 300K levels since touching 600K in June 2019. Similarly, bitcoin’s active address number has been mainly fluctuating in the range of 500K to 700K in the second half of this year, after reaching 900K in late June.

DeFi: The Fuel to Grow Ethereum?
Another layer of assessment we can add to the Ethereum blockchain is the emergence of DeFi.

Maker has been a leader in the Ethereum-based DeFi space, and its smart contract managed platform allows users to stake, trade, and borrow crypto assets. In November, MakerDAO’s protocol upgrade has created multi-collateral DAI, or MCD, which accepts ETH as collateral for DAI generation.

Ethereum is the single largest mainstay of the whole DeFi world. Data from DeFiPulse shows that DeFi has locked up as much as ETH 2.7 mln in the system, representing 2.5% of the total ETH supply. Maker alone has held up at least USD 325 mln in DeFi, which makes up about half of that DeFi locked up potion.

Markets seem to be buying DeFi’s promising outlook and have been gaining traction elsewhere. We believe that Ethereum is well-positioned to benefit from the growth of DeFi in the long term, and we expect to see an increasing number of high-value transactions coming through to the Ethereum blockchain, and that could be an underlying positive for the prices of ETH over the long run. 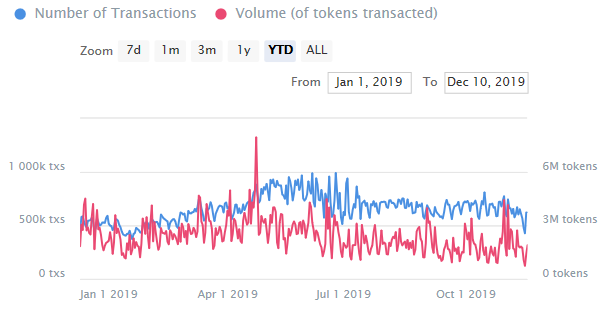 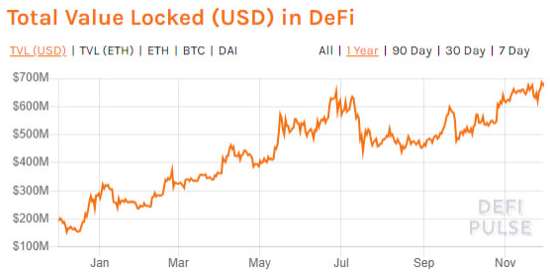 From a macro perspective, the born of DeFi has also shifted the market’s expectations on Ethereum. From being a utility token to more of a high-value transaction settlement application. Moreover, while bitcoin has long been considered a store of value, DeFi could also pave the way for Ethereum to strengthen its store of value character. We expect this shift to become more evident in 2020, alongside the rapid expansion of the DeFi markets.

Enterprise Involvement Gains Traction
Increasing enterprise interest could be another fundamental factor that could shape the future development of Ethereum, especially in the banking sector.

Earlier this month, banking giant Standard Chartered announced the participation of the Enterprise Ethereum Alliance. The EEA claims that it’s an organization committed to developing an open, decentralized web, and blockchain specifications for businesses and consumers worldwide. Other major multinational banks like JPMorgan, ING, Citi, and BBVA, are already members of the EEA.

While this may not be StandChart’s first blockchain investment, the bank has also been in a strategic partnership with Ripple, especially on the payment front. However, onboarding the EEA not only signaling the bank would like to embrace the blockchain technology further, but also perhaps with a focus on Ethereum, or even ETH.

There’s yet a timeline for any upcoming Ethereum project from StandChart. Still, a lot is going on in the EEA. One of the examples would be JP Morgan-backed Quorum, and we could see more similar projects coming out from primary EEA members in the foreseeable future.

Besides, Ernest & Young proclaimed that it had made a significant technology breakthrough, which allows private transactions on the public Ethereum blockchain with much lower cost. With that, we could expect to see more businesses to transfer ETH and other Ethereum-based tokens privately on the public blockchain.

Conclusion
The underperformance of ETH prices has been getting more noticeable since 2Q19. Investment demands, the cost of achieving consensus, network speed, and other market factors may have attributed to the disadvantage of the Ethereum network and ETH prices. However, the rising of DeFi, the growing enterprise interest, and the network upgrades could help to set Ethereum as a critical infrastructure of the digital finance world. Those developments could be a major driver of the ETH prices for the long term.

Bitcoin Halving: The Time to Get in Bitcoin?

A Step-by-step guide for trading simulation