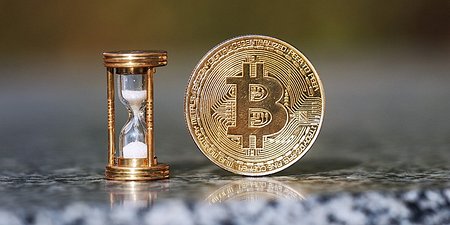 The prices of bitcoin have extended its losses to below 7000 levels as the gloomy sentiment has been looming the broader cryptocurrency markets. While the hype of the next BTC halving has been gradually building up as we are about to wrap up 2019, the seasonal pattern shows that BTC markets could be relatively calm in 1Q, before entering a stronger period of 2Q. Meanwhile, BTC markets also have shown a constant higher trade volume during European trading hours, how day traders can utilize these periods to minimize liquidity risk?

In the traditional world of investing, seasonal patterns have been well known for investors in different asset classes. For example, the US equity markets usually have better performance from November to April, and some weaker performance typically happened in the May-October period. “Sell in May and go away” would be an excellent example of that.

Even Though markets will not repeat the same pattern every year, however, this seasonal pattern has been proved valid and adopted by many market participants.

Bitcoin has been in the market for more than a decade. The seasonality of the leading cryptocurrency has become something that investors worth looking at. Data from Sentix and Bloomberg shows that since July 2010, bitcoin has the best average monthly performance in April, May, October, and November. On the other hand, markets were relatively quiet in December, 1Q, and especially during summertime. 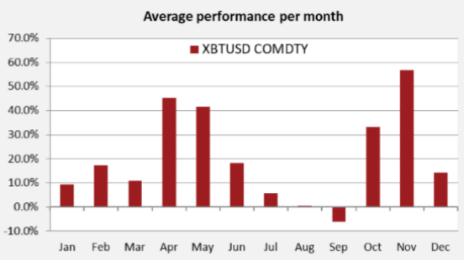 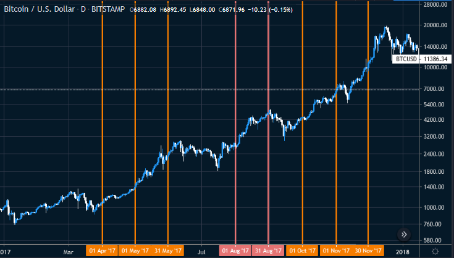 The fact that 2017 is an excellent example of demonstrating that pattern. In April, BTC has surged from lower 1000 levels to 1350 area in the month, and it further rallied to 2600 levels before finishing near 2300 by the end of May. The strong performance can also be seen from October to November, where BTC prices have risen from 4200 to 10000 levels.

In contrast, markets were bearish in September, where BTC plummeted from 4900 to as low as 2900 levels in the middle of the month.

The next bitcoin block reward halving is set to happen in May 2020, and it's expected to be one of the most-watched events in the cryptocurrency space next year. The timing of the event could be interesting since May arguably has been one of the best-performing months for BTC over the past decade. With the hype over halving gradually building up, the market could expect to see some higher-than-average volatility in the coming May, and likely before and after the event occurred. Although it remains unclear how much of the halving has already priced into the current BTC market, or how effective it could reflect on the prices.

BTC markets have also demonstrated a clear trade tendency in the weekly and hourly timeframe. Figure 3 shows that on average, Monday and Friday were typically the busiest days throughout the week, while the average trade volume at the weekend was significantly lower than weekdays. 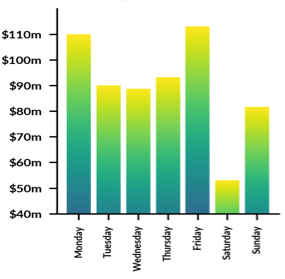 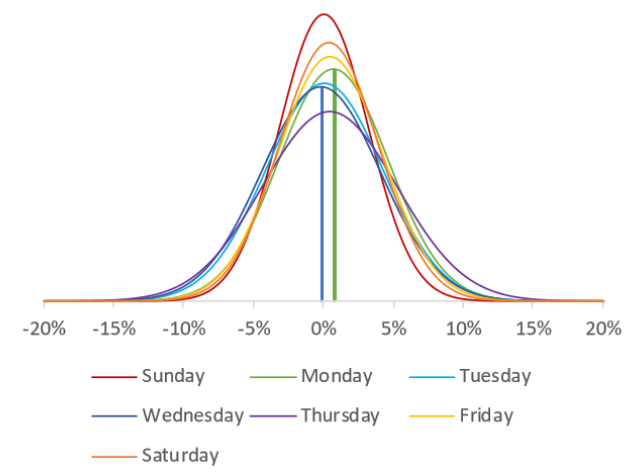 Strikingly, that weekly data matches with the findings of Bitcoin Suisse Research. The firm studied BTC daily average returns by weekday since November 2014 and found that Mondays give the highest average daily gains, while Wednesdays were the lowest.

The firm also performed a weekly dollar-cost averaging strategy analysis, and it shows that Friday would have been the best weekday to invest within the same time frame.

Interestingly, hourly trends were also becoming more noticeable in the BTC markets. Figure 5 shows that European trading hours (Asia late afternoon to evening) were some of the most traffic-heavy periods for perpetual trading, especially on 1300 UTC and 1400 UTC (2100 HKT to 2200 HKT).

While geographical differences of crypto exchanges and their client bases could be a dominant factor in determining the active time of any given exchange platform, though, the trading habit and tendency have been getting more evident in various exchanges.

Traders and investors could minimize their liquidity risks by executing their trades during peak hours. Loi Luu, CEO, and Co-Founder at Kyber Network once said, the total cost of making a one mln BTC transaction can run between USD 10000 to 100000 more than the listed spread on an exchange. That’s why having enough market depth is perhaps one of the essential elements when it comes to trading. The technology factor is also in play here. A trading system that provides lower latency, high liquidity, and improved price discovery like the OKEx Lightening 2.0 system could also help traders to minimize the risks.

Just like other commodities, bitcoin has shown its seasonality in the monthly, daily, and hourly context. Entering a trade on the right day and at the right time seems becoming more critical, especially for HODLers that wanted to employ a cost averaging strategy. By studying the seasonal characteristic of cryptocurrency, traders and investors would able to minimize their liquidity risks and improve the price discovery process with deeper market depth.