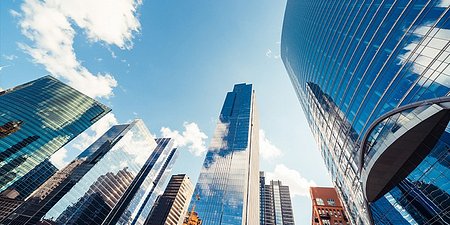 A summary of market performance and factors driving markets over the last month, covering the macroeconomics as well as major cryptocurrencies

December was a relatively stable month for the broader cryptocurrency market, which came after a volatile November. The OKEx’s BTCUSD Index dropped 5% in December after posting the most significant monthly decline in November. The weak performance in recent months also dragged down the Index’s quarterly returns. The Index gave up 13.53% in 4Q19, the second consecutive quarterly decline. Despite the price corrections, we see bitcoin’s market dominance has slightly gained ground. The leading cryptocurrency has increased by 1.68% of the total crypto market dominance in the month and closed at 68.25% by the end of December.

However, the sign of stability in BTC markets didn’t lift the altcoin markets. The Total Crypto Ex-BTC Market Cap gave up 10.36% of value in December, closed at USD 55.903 bln. The fall came after a 15% drop last month. The divergence narrative has continued to play out, as large-cap names have remained underperformed their mid/small-cap peers.

While December was relatively light on the news front, underlying factors like China’s moves in blockchain, the open sentiment on CBDC globally, and the upcoming bitcoin halving remained front and center in the medium/long-term market outlook.

Looking ahead, we expect trade volume and market volatility will gradually pick up around mid-January as traders return to work after the new year holidays. We also wanted to highlight the rising global geopolitical tensions and its potential price implication on cryptocurrency. The global uncertainty and economic stagnation have continued to fuel the rally of gold. If the demand for safe-haven assets persists, the bullish sentiment in gold could spill over to bitcoin.

OKEx Perspectives highlighted the performance divergence in the altcoin space and the possible reasons behind it. Markets have continued to see mid/small-cap altcoins outperformed their larger peers in December. ETH and ATOM are a good example to illustrate that picture. We see ETH plummeted 14% on the month, while ATOM gained more than 5%. This divergence would even be more visible if we put it in a quarterly context. Names like XTZ, NEO, and ATOM registered some 20% to 60% gains, while ETH, XRP, and LTC declined for 25%.

However, this small-cap-bias dynamic in the altcoin space could be shifting once again. Value-driven traders and investors could refocus on major altcoins as many of them were already at/near recent lows. Additionally, the potential sentiment shift led by the positive expectation of halving could also reverse part of the negativity in large-cap altcoins. 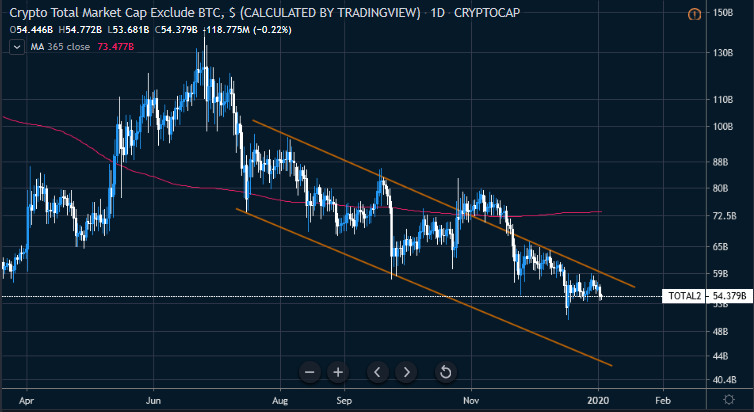 Yet, from a chart perspective, the general altcoin market is still not out of the wood. The Total Crypto Ex-BTC Market Cap has made multiple attempts to break/stay above the trendline resistance in 2H19. While the support at the lower end of the channel seems secure, the resistance of the upper side of the channel appears as strong. We expect to see the Ex-BTC Market Cap will test the channel resistance again in January. However, we’ve yet to evidence a significant positive shift of the monument at this point.

Bitcoin has been less volatile in December, primarily due to the year-end and holiday factors. OKEx BTCUSD Index has only produced a monthly range of around 1300, the lowest since March. In an earlier publication, "Bitcoin’s Seasonality," OKEx Perspectives pointed out that bitcoin markets could be relatively slow during December and 1Q. Given this, the Index could still be producing greater-than-average monthly ranges in the coming quarter, mainly because of the halving event in May. Although how much of the halving has already priced-in remains highly debatable, markets’ positive expectations of the halving could quickly turn into a self-fulfill prophecy, and how that factor plays out perhaps could be more critical than the halving itself.

BTC has continued its journey to reclaim the July-December trendline resistance levels. While the rebound seems healthy at this point, the squeeze of the Bollinger Bands has increased, signaling price volatility may increase in the near-term. Although the direction of the breakout could be hard to determent, we believe that as long as the pair stays above the resistance-turned-support trendline, the medium picture would remain positive.

7690 and 7849 could be the first and second levels to watch, as they are some of the previous highs. Also, the strength of the support at the 50-MA could be another indication.

On the other hand, we see the total open interest in the CME bitcoin futures has been gradually rising to pre-holiday levels. That could indicate there was an increasing number of investors with a growing risk appetite in bitcoin.

OKEx Technicals highlighted the recent strong performance on ETC. It seems like it’s time for ETC to make a turnaround, and ETH could potentially make a strong comeback.

ETCETH has formed a daily triple top pattern; signaling ETC may not be able to continue to rally. The RSI also seems supporting that argument with a bearish divergence. Also, a MACD bearish crossover appears in the making.

Level-wise, the previous low near 0.0328 could be the first key level to watch. If seen, the testing of the area of 0.0304 could be increasingly possible.

OKEx (www.okex.com), the world’s largest cryptocurrency spot and derivatives exchange, attended the Blockchain Economy 2020 in Turkey, which is of the highest-standard blockchain summit in MENA and Eurasia. Lennix Lai, Financial Markets Director of OKEx, delivered a keyn...

OKEx (www.okex.com), the world’s leading cryptocurrency exchange, announced to add 19 new cryptocurrencies for spot margin trading and Savings service at 07:00-08:00 on 21 Feb, 2020 (UTC), including its global utility token OKB, which has received a lot of market attenti...

OKEx, the Malta based world largest cryptocurrency spot and derivatives exchange recently announced to launch tick-by-tick push notifications for all the trading instruments, which allows users receive real-time price movements in all crypto markets via OKEx API when mak...

OKEx (www.okex.com), the world largest cryptocurrency spot and derivatives exchange, will list Ravencoin (RVN), a decentralized, open-source, proof of work blockchain protocol built on a code fork of Bitcoin, to its spot market with RVN/BTC and RVN/USDT on 9:00 Feb 19, 2...