Bitcoin Halving: The Time to Get in Bitcoin?
Share 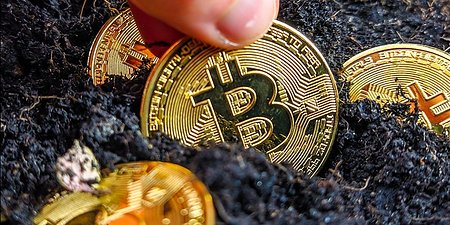 Bitcoin Halving: The Time to Get in Bitcoin?

The current market expectation of a bull run led by Bitcoin halving mainly develops on the experience of the two previous halvings. We can see from the figure below that Bitcoin has halved twice before. After the first halving, the then BTC all-time-high (ATH) was broken after 367 days and the BTC market price soared by 9,260%. After the second halving, a new ATH was reached 526 days later, and the price was up by 2,976%.

Therefore, despite compared with the previous two halving cycles, the emergence of factors, such as the Bitcoin market cap gets bigger and the prosperity of the derivatives market weakens the bitcoin’s volatility, many still believe that the third halving will definitely increase Bitcoin price by more than 10 times. 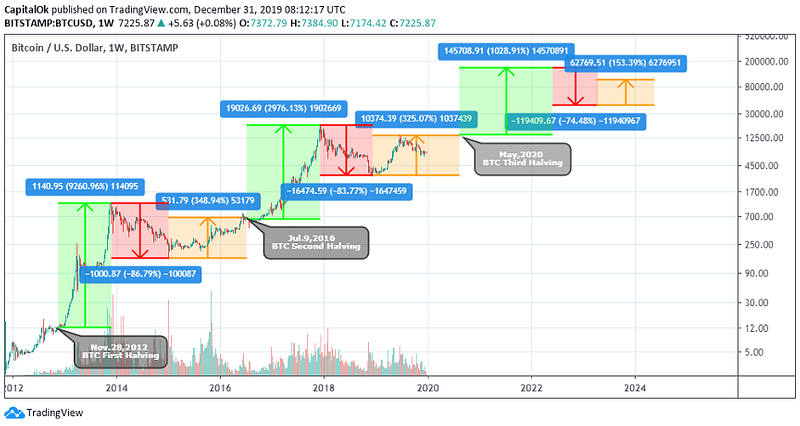 We will use the Moving Average (MA), Altman Model (Z-score), and Reserve Risk Model to give you a thorough understanding of whether it is a good time to buy Bitcoin.

The moving average (MA) refers to the averaging of the Bitcoin price trend. This model is more inclined to believe that historical prices have a stronger impact on future trends. MA commonly shows over 5 days/10 days; 30 days / 60 days; 120 days / 240 days period for short-term, mid-term and long-term investments respectively. Here, we will use the half-cycle of Bitcoin two-year MA and MA*5 indicators as analysis tools, which mainly shows in which periods of buying and selling Bitcoin can generate greater profits.

The figure below shows that when the price drops below the 2-year MA (green line), buying Bitcoin will generate an excess return; when the price breaks above the 2-year MA x 5 (red line), it presents the best-selling time. With Bitcoin halving, it exists obvious market cycle fluctuations: skyrocketing, correction, consolidation caused by excessive excitement of market participants and excessive contraction of prices. It can be seen from Figure 2 that the green area happens approx. one year before halving. The same applies, where the best time to buy Bitcoin for the third halving lies between December 2018 and April 2019. We may be entering a second green area. 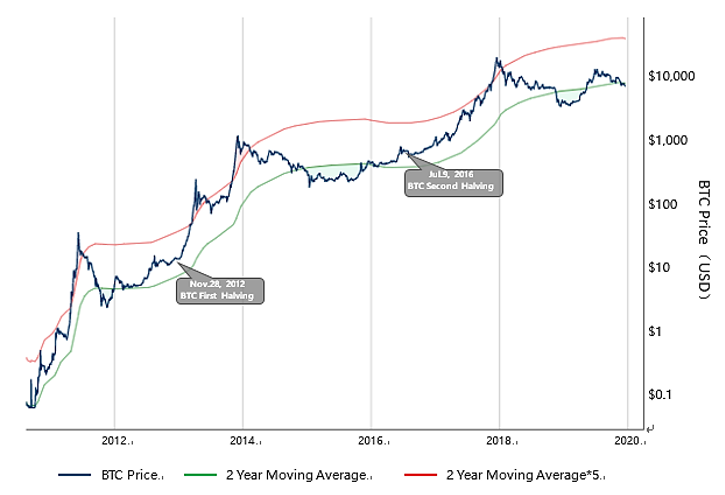 The Atman model (Z-score) indicates the top of the market with higher accuracy. This indicator is more inclined to discover the fair value of Bitcoin through C2C transactions. To calculate:

Market Cap is expressed as the current price of Bitcoin multiplied by the number of coins in circulation; Realized Cap (fair value) takes the price of each Bitcoin when it was last moved (i.e. the last time it was sent from one wallet to another wallet). It then adds up all those individual prices and takes an average, multiplies the average price by the total number of coins in circulation.

Realized Cap generally represents the price of large over-the-counter transactions. According to BTC.com data, as of Jan 3, 2020, the top 0.000349% addresses hold 15.14% of Bitcoin. The Bitcoin market is still a highly concentrated market, and to a certain extent, large off-exchange transaction prices can better represent the fair price of Bitcoin.

The calculation of Z-Score is the difference between market value and fair value, divided by the standard deviation of both data. Z-Score can be used to identify periods when Bitcoin is extremely over or undervalued relative to its ‘fair value’. As can be seen from Figure 3, when the market value of Z-Score is abnormally higher than the fair value, it will enter the red area, indicating that it has reached the top of the current market cycle. Contrarily, Z-Score will enter the green zone when the fair value is abnormally higher than the market value, indicating that the bottom of the current market cycle has been reached. Currently, a new green area is approaching. 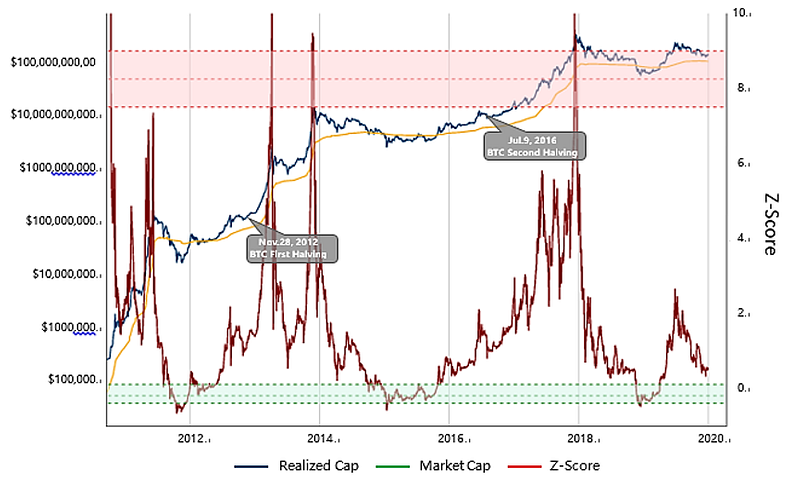 Reserve Risk indicators tend to attribute to the value of Bitcoin to long-term holders. The risks mainly depend on the “Bitcoin-days”. Bitcoin days = the number of Bitcoin * the number of days that Bitcoins are placed in one address. Once Bitcoin is transferred, the Bitcoin days are destroyed. For example, I bought 1 Bitcoin and kept it in my wallet for 7 days, then I sold it, and when it was transferred from my wallet to a new buyer’s wallet, it was destroyed for 7 Bitcoin-days. The more Bitcoin-days it destroyed, it shows that the number of long-term Bitcoin holders in this period is decreasing, and that the risk of holding Bitcoin is increasing at the same time.

The following figure shows the destruction of bitcoin-days with different holding periods. The periods are as low as 1 day and 7 days, and as high as 3 years and 5 years. The short-term holding represents demand and long-term holding represents supply. As seen from the figure, each round of BTC price surge is driven by a new demand for bitcoin hoarding. 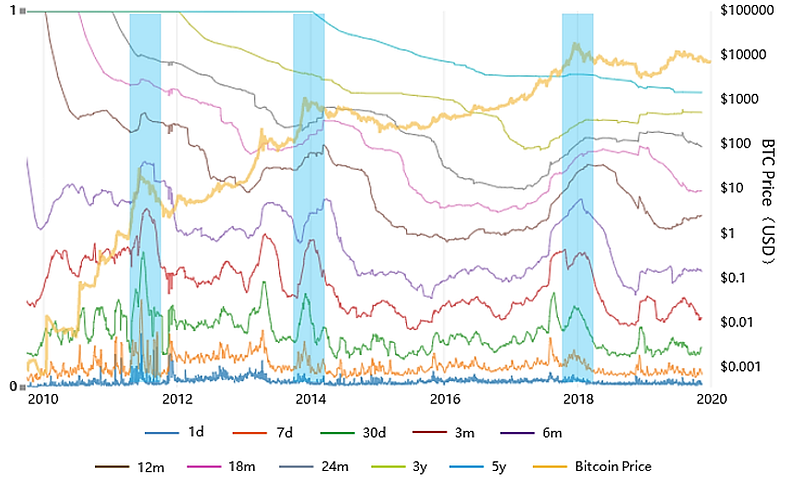 When converting the destruction data of Bitcoin-days into assets held in different periods, the results are shown in the following figure. It can more directly reflect the positive relationship between each round of bitcoin price surge and the number of bitcoin held. Among them, the 1-day data can be deemed as the daily on-chain transaction volume. 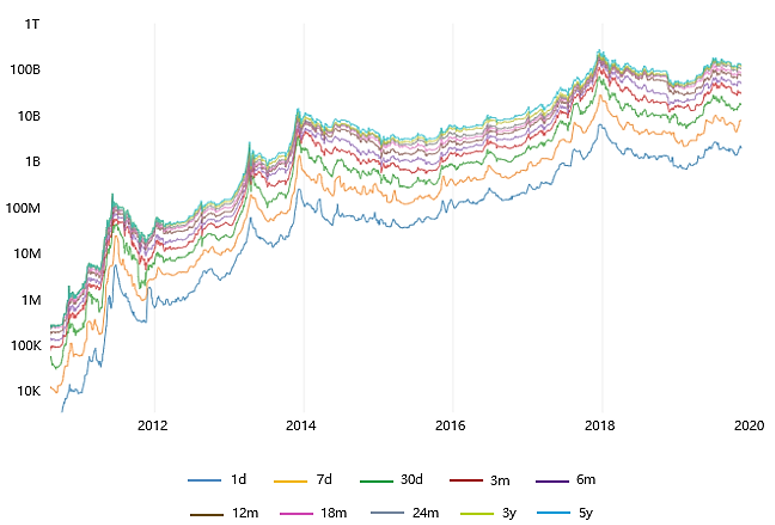 Figure 6 shows that every time the Reserve Risk value enters the red area, it is a market peak. When it enters the green area, it is a good time to hold BTC. And the market currently (early January 2020) is situated in the green “holding” area. 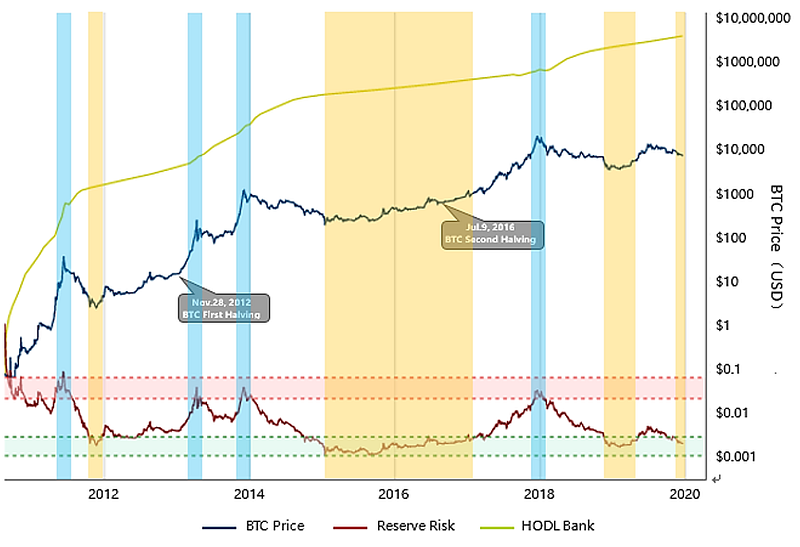 In this article, we have analyzed the current market cycle of Bitcoin with three technical indicators: moving average (MA), Atman model (Z-score) and Reserve Risk. Despite the analysis which indicates the current time (early January 2020) seems to be another entry opportunity, it should be noted that the price rise of Bitcoin after halving has a tendency to prolong every time. For traders who pursue maximized returns, they should note that this market cycle is not expected to complete until 2022.