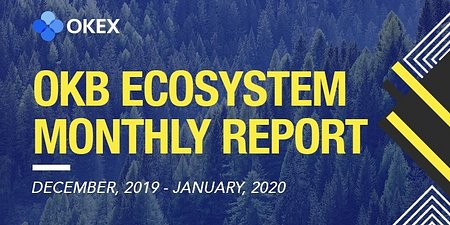 OKEx (www.okex.com), the world’s largest cryptocurrency spot and derivatives exchange, announced the release of the latest monthly report of OKB, its global utility token, for Jan 2020. According to the report, OKB recorded an astonishing 24.9% increase rise from 2.61 USDT to 3.26 USDT, with 25% month-on-month increase over last month. The OKB team focused on expanding OKB storage support and have formed three new partnerships in these regards. Besides, OKB has also welcomed a new EURO depositing channel and landed on Coinbene, which further promoted the globalization of the token.

As of today, OKB has formed ecological partnerships with as many as 32 businesses globally and has established depositing channels for a number of major fiat currencies, including US dollar, euro, Korean won, Vietnamese dong, and Indonesian rupiah. What’s more, OKB trading pairs have also been listed on many major C2C and spot exchanges.

OKEx has also partnered with three businesses and to expand OKB storage support for a variety of wallet types, including Blocto, a Taiwanese contract wallet, Cool Wallet, a global hardware wallet and Hoo’s wallet, a public chain asset cloud wallets. In order to raise user’s awareness on asset security, a free OKB hardware wallet promotion was held with Cool Wallet, giving away portable OKB wallet cards that are accepted in different shops for purchase.As of now, OKB is supported by nine wallets, including Ledger Vault, Bitpie, Mirthril, Kcash, Pocket, and Cobo.

In January, OKB was listed on Bitlocus, one of the major EUR fiat-to-crypto exchanges in Europe, further enhancing its liquidity and competitiveness in the market, OKB. Thanks to the listing, OKB can now be purchased with a variety of mainstream payment gateways in Europe, such as SEPA, SWIFT, and VISA. OKB has also partnered with CoinBene to list OKB spot trading pairs.

So far, OKB is trading on dozens of mainstream exchanges, such as Bitmax, Bitfinex, and BiKi, with over 40 major crypto trading pairs available.

The above progress has contributed to the impressive performance of OKB in the secondary market, resulting in a high ROI of 386% last year according to AMBCrypto.

OKEx (www.okex.com), the world’s largest cryptocurrency spot and derivatives exchange, has announced to list Creditcoin (CTC), an immutable, transparent and borderless blockchain network that provides the mass access to crypto loans and help them build their credit ratin...

OKEx, the world’s largest spot and derivatives exchange, allows users to purchase cryptocurrencies directly with 30 major fiat currencies from 17 trusted payment methods, including VISA, MasterCard, and Apple Pay, etc. It is noteworthy that OKEx is now among one of the f...

OKEx, the world’s largest cryptocurrency spot, and derivatives exchange announced the listing of Orchid (OXT), a peer-to-peer open marketplace built on the Ethereum blockchain for buying and selling VPN bandwidth using OXT. The depositing and withdrawal of OXT have been ...